After what has been a complex year thus far for the Old Lady, market expectations for a hike were fuelled at the previous meeting after MPC member Haldane joined the ‘hike’ camp, leading to a 6-3 split on the board with policymakers confident in their views that adverse weather conditions were a primary cause of soft growth at the start of the year. Since then, economic data and comments from MPC members has lead to markets pricing in a circa 80-90% chance of a hike.

DEVELOPMENTS SINCE THE PREVIOUS MEETING

Since the previous QIR, focus for a bulk of the market has been on the UK’s growth prospects. The initial Q1 UK GDP print registered at a meagre 0.1% with the ONS suggesting that adverse weather conditions played a limited role in the lacklustre performance. However, at the May QIR, the BoE took an opposing view and placed more weight on temporary weather effects; the MPC appear to have been vindicated in their beliefs with Q1 GDP eventually revised higher to 0.2% from 0.1%. Further to this, RBC highlight “the ONS’s new monthly estimate of UK GDP showed activity recovering in April and May from the weakness of Q1 leaving the economy on course to expand by 0.3%- 0.4% q/q in Q2, in line with what was expected at the May QIR”. Further to this, HIS Markit following June PMI metrics forecast Q2 growth of 0.4%, whilst the latest 3M/3M NIESR GDP estimate for June printed at 0.4%.

On the inflation front, the most recent set of CPI metrics revealed Y/Y headline CPI of 2.4% vs. Exp. 2.6% with the core Y/Y slipping to 1.9% from 2.1% despite an expected uptick to 2.2%. GBP was quick to sell-off in the immediate aftermath of the release, alongside support for Gilts. However, the release did little to derail expectations of an August hike with Lloyds highlighting that overall “inflation over Q2 printed at 2.4%, ensuring that inflation continued to track in line with the BoE’s projections”.

Elsewhere, labour market data has continued to indicate that slack is still being eroded but concerns remain about the prospects for wage growth with ex-bonus earnings slipping to 2.7% from 2.9% since the May QIR. In the retail sector, Rabobank highlights “high street sales posted its strongest quarterly performance in almost 15 years, while activity in services trade picked up to trend levels”. With the all-important UK services PMI figures not due for release until Friday, policymakers will most likely refer to the June survey data which overall confirmed the narrative of a recovery in activity from the soft footing seen at the start of 2018.

Brexit remains the key headache for policymakers with recent developments failing to paint a clearer indication of what the UK’s future trading relationship with the EU will be. The beginning of July saw the formation of UK PM May’s ‘Chequers Plan’ which aimed at a ‘common rulebook’ for all goods with the EU, a ‘joint jurisdiction institutional framework’ and a ‘facilitated’ customs arrangement’ with the aim of unlocking the stalemate in negotiations with the EU. However, this was met with resistance from the Brexiteer wing of her party and subsequently saw the departures of Brexit Secretary Davis and Foreign Secretary Johnson. Since then Davis and Johnson have been replaced with Raab and Hunt respectively, but progress has since been limited with EU’s Chief Negotiator Barnier essentially rejecting the plan put forward by May.

The political landscape in the UK is one of hostility with PM May just about surviving calls for her to be removed by her party. With May holding onto the helm, she took the opportunity to assume control of Brexit negotiations by removing such powers from the Brexit department. This could prove to be a successful power-play in the long-term but the prospects of a ‘smooth transition’ are rapidly receding and has subsequently prompted UK press coverage of crisis measures such as emergency stockpiling of goods. The BoE’s current forecasts are for a ‘smooth transition’ from the EU but this position is becoming increasingly untenable and may have to be revised at some stage as the UK moves closer to March 2019. Rabobank suggest that doing so at this stage would be too politically sensitive but will soon need to begin to take the prospects of a ‘hard’/no deal Brexit into consideration.

Governor Carney recently stated, “data gives confidence that the soft UK economy in Q1 was largely due to weather and not economic climate” and reiterated that tighter monetary policy will be needed. Deputy Governor Broadbent has given little away with regards to his voting intentions by refusing to disclose which way he would vote in a recent public appearance which offered little in the way of fresh insight. Departing-hawk McCafferty has continued to bang the drum for a rate hike by recommending that the BoE “should not dally” in lifting rates. Elsewhere, in the hawk camp, Saunders is nailed on to once again vote for a hike as he did in June with recent comments noting that he believes rates could need to move higher at a faster rate than what is currently priced into the market. Vleighe, since the May QIR has suggested that “his central projection will require one or two quarter point rate increases per year over the three year forecast period”. Haldane is once again set to vote for a hike after surprising markets by doing so in June and justifying his decision by stating that lifting rates would still leave UK monetary conditions "extraordinarily " accommodative historically. Other MPC members with a more neutral stance include Tenreyro who has recently conformed to the tone of the MPC with regards to Q1 growth by stating "In May and June I thought it was prudent to wait a bit to confirm that the soft patch was due to the weather, and not a sign of something more fundamental going on with demand". On the more dovish end of the spectrum, Cunliffe’s (a dissenter when the Bank lifted rates in Nov) most recent comments have called for the Bank to move slowly on rate hikes. Another potential dissenter could be Ramsden who also opted for unchanged in November, that said, recent comments saw the central banker back the MPC’s view in May that ongoing tightening of policy is appropriate.

An additional focus for this week’s release will be the unveiling of the Bank’s r* metric which will convey the MPC’s expectations for rates over the medium-term. More specifically, r* (equilibrium rate) signifies an “indication of the level of interest rates that the MPC views as being consistent with stable inflation and which closes the output gap over the medium term”, as explained by Lloyds. In terms of expectations over what level r* will come in at, RBC highlight that recent communication from the Bank suggests a bank rate of around 1.5% signifies the level at which the BoE will begin to reduce the stock of QE; RBC expect the rate will come in around this level with many in the market looking for a range of 1.5-2.0%.

In terms of expectations this time around, consensus looks for little in the way of major changes to the MPC’s fan charts. On the inflation front, RBC look for little in the way of material changes in the short-term as slightly lower oil price inputs than those seen in May are likely to be offset by upward pressure from changes in market interest rate expectations. TD Securities suggest a potential upgrade to 2019 and 2020 inflation citing higher oil prices. On the growth front, Lloyds see little reason for any changes to the May projections after the BoE at the time lowered their 2018 GDP forecast to 1.4% from 1.8%. Looking further ahead to 2019 and 2020, Lloyds suggests that expectations for 2019 and 2020 growth rates of 1.7% could be a tad optimistic. 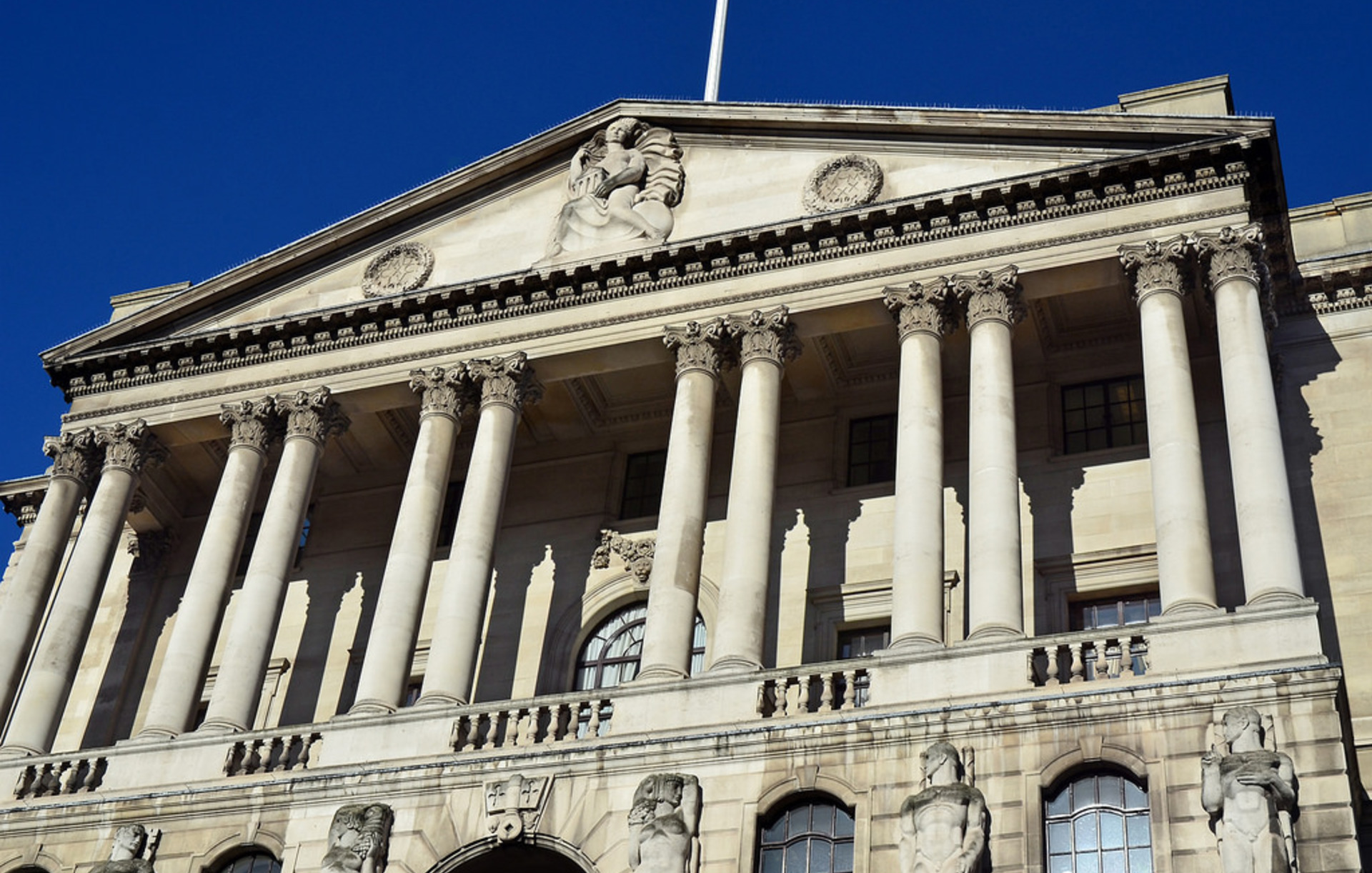